Cllr James Burn (Leader of the Official Opposition) said, “If the Conservatives enact this plan, it'll mean they put the council tax of the most vulnerable up by the cost of 18 loaves of bread a month, but everyone else's up by the cost of just 1 loaf of bread. And this plan isn't just incredibly unfair, it's also illogical. Putting more pressure on the most vulnerable will only mean they have to use council and health services more, which will just cost tax-payers more in the long run. Raiding the back pockets of the most vulnerable cannot be a fair or sensible way to boost council coffers and I encourage everyone to reply to the consultation to tell the Council this plan is short-sighted and unfair and to ask them to think again. Just visit http://beam.to/unfairsolihull.

The Council are allowed to use their discretion to decide whether or not to charge some low-income groups (e.g. the sick, disabled and low-waged or unemployed) council tax. Previously, they have chosen not to. This is, in part, because (according to Solihull’s Index of Multiple Deprivation stats) Solihull is one of the wealthiest yet one of the most unequal boroughs in the country. The council's own report on this measure acknowledged that this proposal will hit the poorest and women hardest, which can only make matters worse.  If this plan becomes policy, this will mean that residents in Solihull’s poorest ward (Chelmsley Wood) will pay twice the council tax they would if they lived just over the border in neighbouring North Warwickshire (as they charge a much lower rate). 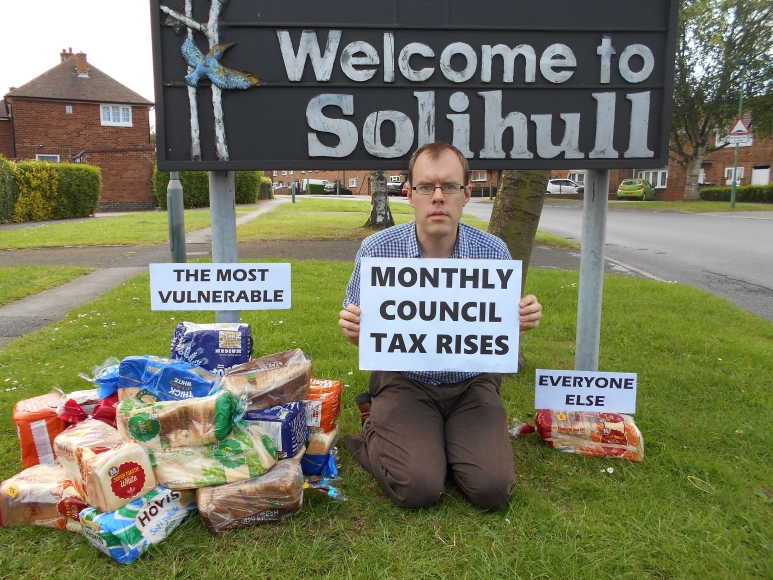 The Council are also being criticised for their consultation question. This reads, “Do you agree that working age people in Solihull who are liable to pay council tax should be asked to pay a minimum of 15% towards their council tax?” and does not make clear that the proposal applies only to Solihull’s most vulnerable and least able to pay, nor that this rise of 15% is against a backdrop of a rise of 1% for all those on a higher income.

The consultation runs from now until October and the Green Party are encouraging everyone to tell the Council “no” to their plan and tell them to consider other options, like putting less into savings, a fairer council tax rise, or making savings elsewhere. Fill in the consultation athttp://beam.to/unfairsolihull

Back to main news page